The goats have got our origami?! 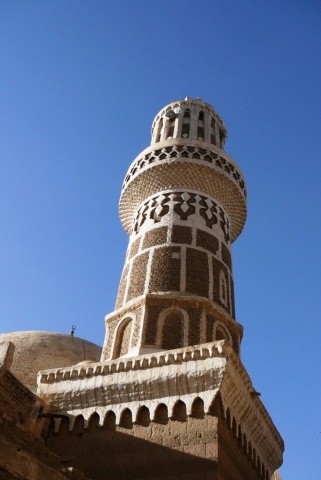 Minaret in the old city.
It is the day before Eid ... the streets are busy. And the rubbish truck didn't appear to make it last night.

We put our bags of rubbish (shopping bags, not the large sacks) on the street corner for clearance last night ... yes including a bag of used toilet paper origami ... and they were still there this afternoon. As you know, some people have goats in their bathroom at this time of year ... but there appears to be a small herd on our street corner in preparation for the slaughter tomorrow. And they're munching through the rubbish ... possibly used toilet-paper origami included?

In case anyone wants to label me as paranoid, compulsive-obsessive ... that I am not. Would I be here for a third time if that was true? I love Yemen and I eat where Yemenis eat ...

There's a goat in the bathroom!

Marie went to our teacher's house today. "Excuse moi" she cried "... there's a goat in the bathroom".

The answer as we found out is because tomorrow is Eid (al Udha) ... or Hari Raya Haji in Malaysia-Singapore. It commemorates Abraham's (pbuh) willingness to sacrifice his son Ishmael for God. Muslims sacrifice a goat, sheep etc and share it with the poor. The festival is also the time when Muslims perform their major pilgrimage or haj to Makkah (Mecca).

We're off to the teacher's house to share their lunch. Marie won't be eating the goat ... "I can't eat anyone I have met" ... she's even fed and patted the goat.

There's certainly a festive air in Sanaa ... the roads, streets and markets are crowded. Lots of colourful dresses, cakes and biscuits for sale. It takes forever to go anywhere by road these few days :-(

Trip within a trip ... weekend away 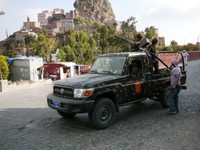 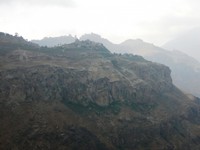 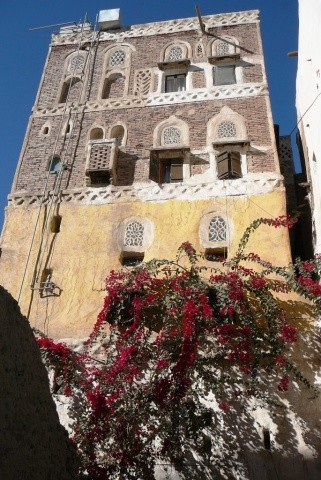 View from the front of the house.
I arrived in Sanaa [Sanaa-travel-guide-1314202] after four flights (two of which were full and uncomfortable) ... firstly from Kuching to Kota Kinabalu, then to Hong Kong, then to Dubai and then finally Sanaa.

1. I had a 10 hour transit in Hong Kong which I put to good use by going to the city for the hardest (best) massage in my life.

2. But the transit in Dubai was just a tad over the minimum connection time ... enough to grab a bottle of bubbly from the Duty Free. If I had known Sanaa customs would be so lax with grog, I would have got the full allowance of two litres :-(

I was met at the airport by Marie (my host-to-be) and my my new teacher. We immiediately called by my new school (YIAL, Yemen Institute of Arabic Language) to formalise my course arrangements. 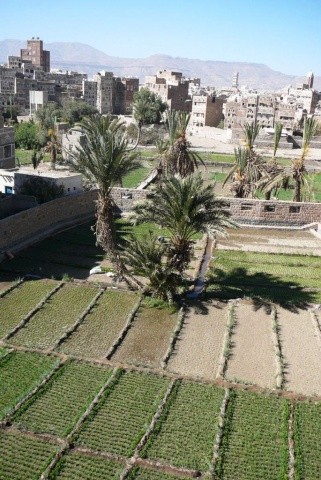 View from our terrace ... breakfast is served here daily :-)Marie had accurately conveyed all my requirements to the teacher already so there wasn't much to be done. She's even organised the teacher to do house-calls for the both of us ... we never have to go to school!

Then off to my home for the next month! Marie had rented the top two floors of an old Yemeni home, complete with modern bathrooms and a terrace overlooking allotments used for growing vegetables. My room was very nicely set up already meaning I didn't have to buy blankets, pillows etc. She had actually bought me a blanket with a teddy bear ... I will decline to give that bear a name in case I end up in jail as in the case of that English teacher in Sudan!

Unfortunately, due to a misunderstanding there is no spare room and Marie has moved into the mafraj or Yemeni penthouse lounge. 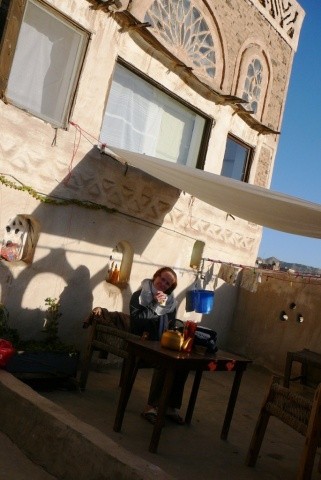 Our breakfast terrace (excuse the slanted view ... odd angle to fit everything in).The view is to die for but it does mean some inconvenience for her ... including moving out of the lounge when I have my classes twice a day.

There is a small price to pay for being in a historic building:

1. Despite the modern bathrooms, the plumbing (as in Greece) aren't set up for toilet paper. As in some parts of Europe, we have a bin next to the bog ... I've taken up origami of used toilet paper before depositing them in the bin ... for aesthetics and hygiene reasons.

2. Much of the hallways are very low ... I cannot stand up straight. And doors are about shoulder height. Instead of walking around, there is a lot of shuffling around in a stooped fashion.

3. I have to plan my movements carefully (eg. to buy water, to let the teacher in etc) as I'm four floors up without lifts . 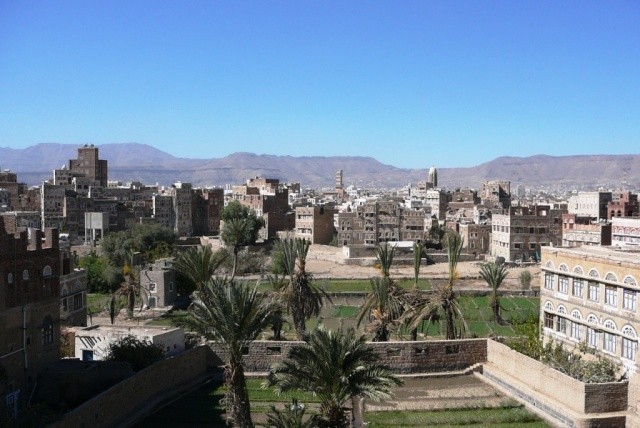 View from our terrace ... breakfast is served here daily :-).. and initially also have to cope with the altitude.

Our top flat is shared with a German girl ... a semi-separate lower flat is let out to two American girls. There's been a bit of bother because some of our flatmates like to sunbathe in the nude. This is a problem with a male Yemeni (our teacher) spending so many hours in the house each day for lessons.

In fact, with the teacher coming, we have to announce his arrival to ensure that our flatmates are adequately covered (eg. legs, shoulders or arms if they feel the need) even if they're not sunning the privates. In fact, in this region some houses are equipped with a door knocker for men and a separate one for women. Residents can discern from the sound of the tap as to whether the visitor is male or female and cover-up appropriately.

A fortnight of internet withdrawal

I'm back in Kuching [Kuching-travel-guide-1096915] for Mum's 80th birthday ... there's no computer in the house so internet is not so easily available at an internet cafe. I look forward to Sanaa where I'll at least have slow internet.

I didn't do much eating this time ... there was a patch when it rain for three days solid plus half a day on the fourth! That's the landas or wet season in Sarawak! Didn't go out much during that time.

Instead, I did some house work ... there's white powdery mould on many surfaces due to the 90% humidity . Plus lots of swimming since it is already wet.

Mum's birthday dinner went without a hitch, having been organised by my brother and sister-in-law. It was a small affair by Kuching standards with an invitation list very exclusively limited to about 60 guests ... mainly relatives and very few friends. Those of you with access to my Facebook will have further details.