Today I left Yangshuo for Hong Kong via Guilin (city and airport). I'll miss the cheap eating ... up to two big beers and three ice creams per day:

1. A 600 ml beer is CNY5 (about EUR0.50) for locals and 2-3 times the price for tourists. There's now a good choice apart from the famous Tsingtao ... there's one called Li Quan (or just Li Q) ... its nice without any bitter after-taste or too much head (I've been told I haven't got much taste in beer).

2. While I love my red-bean ice creams, I've tried other varieties ... theres mung-bean and tea one which is nice too. Magnums are CNY5 here which is about the third of the price in New Zealand but are bit smaller ... they are pricey by local standards as many varieties are only CNY2.

China is modernising very quickly but scratch the surface, it is still very traditional ... in my hotel the bar is very funky and serve cocktails with names like C*cksucking Cowboy and Sexy Thailand Girl ... they have pretty young waitresses but it is still the old grandma that collects the cash!

Today I decided to take another bike trip this time south towards Moonlight Mountain and the Big Banyan Tree. Didn't have a good start as the road was very busy with buses and trucks ... and hence dusty. It could have been worse as I met some people who said they were white (from dust) after being on one bad road ... little did they realise they were white anyway.

The mountain is just a normal Yangshuo peak except it has a hole near the top in the shape of a moon. It was a hard climb and questionably worthwhile ... there was this little old lady who tailed me all the way up and down with a box of soft drinks and beer so I made a purchase from her at an inflated price at the end just out of piitee (walked up with a French guy and his papa ... hence the French accent).

The Big Banyan Tree was a disappointment ... being a historic tree of over 600 year old I was disappointed to see it walled in as part of a large complex combined with amusement, shopping and a temple. This is the new China :-(

After the disppointment I decided I had enough ... there are some caves here, some with clear water and some with thick mud pools in which you cannot even sink. Pass ...

I had a massage in the afternoon ... it is always hard to know whether a massage place is truly massage or "massage-plus". I checked with some locals before going but as usual they're commonly staffed by pretty young girls who do a decent job sometimes. I've been told by well-heeled Europeans that in the five-star places the girls ask "do you want sex massage?" even when their wives are around! I didn't have any problem in bog-standard open plan outfit.

Prostitution is a big problem in China. Often in the streets (but not in Yangshuo), you'll here female voices saying from behind you "Do you want massage?". Even in Lhasa [Lhasa-travel-guide-228118], we used to have late night massages offering massage. It becomes so easy to assume every Chinese woman with a westerner is a prostitute. Fortunately people here are more gracious and tolerant ... I haven't heard of Chinese women being abused for being with a westerner unlike in rural Vietnam. 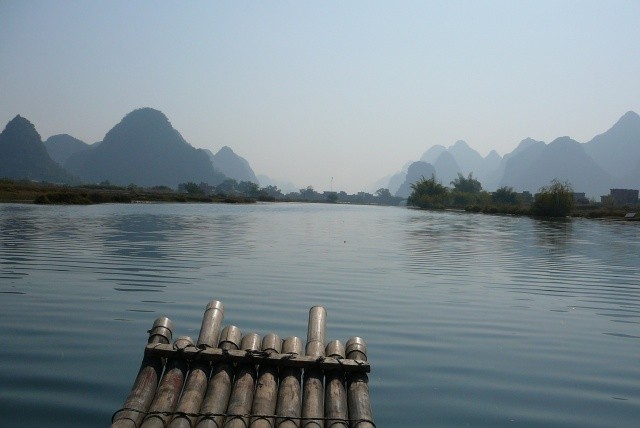 Hopped off the bus with my bike and onto the raft for a sedate cruise on the river.
After breakfast I picked up my mountain bike (EUR1 per day) and cycled to the bus station. The cycle shop man helped me on ... oh dear, my bike in the aisle of the minibus wasn't a good idea but the man said it was OK and perfectly normal.

Even though I had to pay one fare for the bike (and one for myself) I was rather embarassed by the inconvenience I had caused ... the bike was obstructing three rows of seats. But people here are tolerant (whereas in the West people are considerate instead).

Forty minutes I hopped off and was met by my pre-arranged boatman who took me on a 1.5 hour punt on a bamboo raft (with my bike on board). The shallow river is damed up in many places along the way, with drops of about 1 metre. 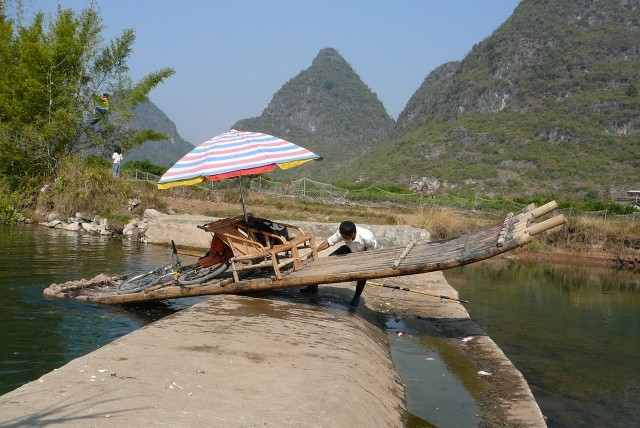 Then we met with a dam.

Being the dry season, I had to hop off while the boatman push the boat down to the next level ... but we were able to just glide down to the next level in a few spots ... like white water rafting. Yee ha! Not quite the tranquility I had expected even though the sedate moments were very appreciated ... there were very nice reflections of the mountains in the clear river water.

When my river ride finished, I cycled back to town along tracks in the rice paddies and past small villages. Very pretty with the limestone hills everywhere ... everything seems prettier from a bike ... I can now understand why people cycle through Vietnam or Sumatra.

I'm now updating this blog in an internet cafe the size of over 10 school classrooms . 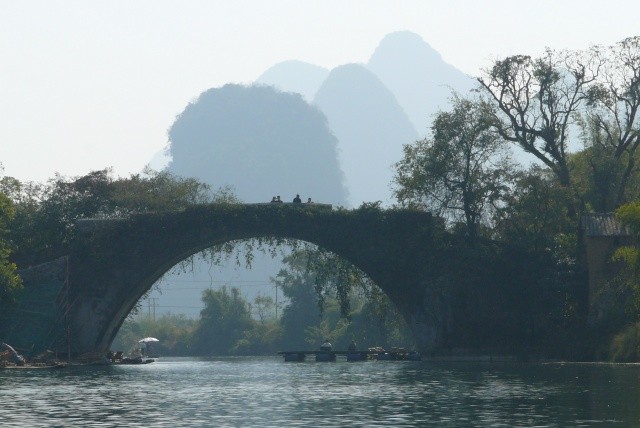 And also a 600? year old bridge... it has about 200 computers and is not large by Chinese standards. I guess not many people have computers at home.

In the evening, I went to "Impressions Liu San Jie" (see separate item) on a perfect full moon night. It was the most amazing show I've ever seen in my life. I met a French family in the transport there and helped them (a very little bit) ... we ended up having dinner together and them paying for it. That was a very kind gesture ... they obviously hadn't taken offence at my attempt at French ... which is limited to: wee wee, ppptt, ppffft and "what a piiteee!". One of the brothers is a nuclear scientist working for a French company but deployed to the USA.

Sunset on the Li River 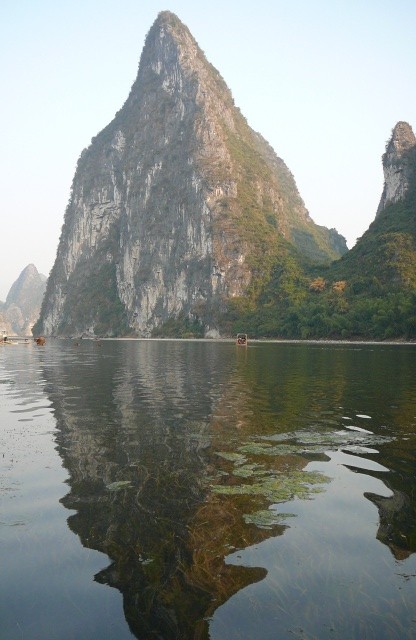 Started off our Li River cruise in the daylight.
I slept till 1000 today ... my weariness is catching up ... besides I have a beeauuutiful hotel room for about EUR 12.50 per night just off all the clubbing and eating areas :-)

In the early afternoon, I took a bus out of town to Xing Ping where I boarded a little boat to view the karst limestone peaks from the Li River. Being winter, the sun sets quite early ... the sunset and the haziness added to the mystique and it was just so scenic ... the scene was worth a million dollars ... or actually CNY20 (about EUR2) since we were shown the exact scene depicted on the back of the CNY20 note!

In the night, I went fishing with a local fisherman and his comorants. The duck-like birds dive into the clear illuminated water (you can see them underwater) and come up with fish. Because their necks are constricted with a rope, they cough up their catch into the basket for the nice man ... who presumably has conditioned them with rewards previously. I've seen these talented creatures handle two fish (no plural, correct?) in one throatful ;-)

I couldn't have picked a better night for the fishing trip ... the moon was just a smidgen less than full and in the moonlight we could see the silhouettes of the karst peaks that Yangshuo is so famous for, plus the reflection of the peaks and the moon in the calm waters.

To the backpacker's paradise

I woke up early at Cheng Yang Bridge and ... deja vu ... three buses later I was at my next destination, Yangshuo. This is like the backpacker's capital of China. Lots of businesses speak some English (a rarity in most of China). It may also be the adventure capital ... there is an climbing-abseiling shop opposite my hotel, lots of mountain bikes for rent.

But best of all lots of yummy restaurants ... for the first time I've seen dog on the menu in English ... normally I see it in Chinese only.