Why the Dutch are in season ... 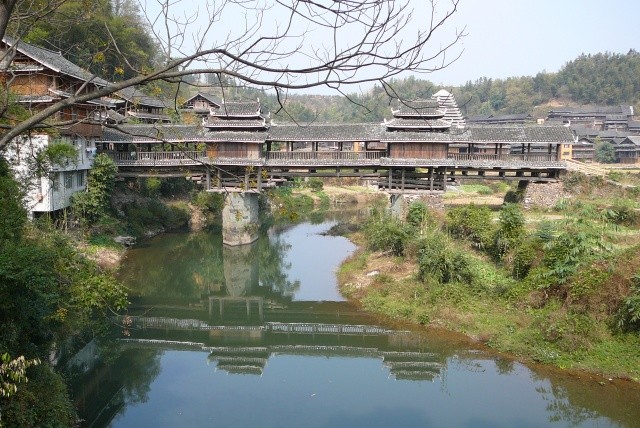 The more authentic (and less preserved) bridge behind the town.
I walked to the a nearby village today ... enjoyed the scenery and the market scene (being market day) in a village along the way.

It is relatively unspoilt here and the village was unpretentious and authentic, down to a dusty coffin in someone's front porch ... I dared not ask whether there was a special offer, if it was the wrong size or maybe the sick person recovered. Obviously they don't share the same taboo as ethnic Chinese people.

As I was settling into bed (7:30pm), the landlady told me the village is having a traditional dance evening at their Drum Tower. It was an interesting performance which ended in some sort of a Dong line-dancing and best of all ... a big Dutch man being tossed into the air then landed back on the arms of the villagers.

At the performance I met several interesting people . 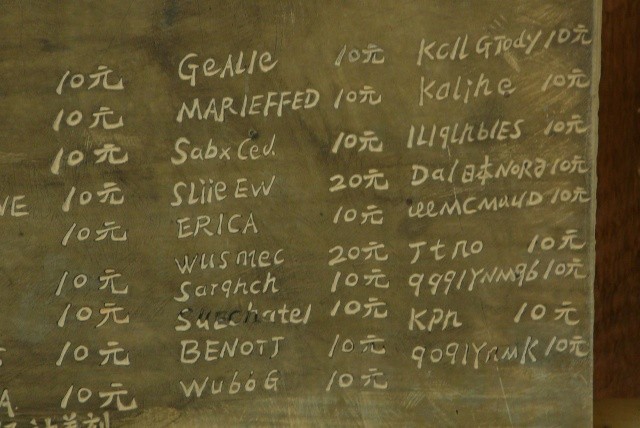 See your name set in stone for a small donation of CNY10 (EUR1)... there was Belgian tour leader, Christophe, who spoke fluent Mandarin (yes, shame on me ... but Europeans rarely get the tones quite right). He explained that the Dutch earn a lot of money, get lots of annual leave and have very tiny living rooms ... hence they're all in China :-)

Christophe being a tall Mandarin-speaking Westerner was most popular with the schoolgirls ... they crowded around him giving him hugs and had their photos taken. Treated a bit like a sex object really. He says that being based in Beijing [Beijing-travel-guide-208144], the local Beijing girls don't care about Westerners anymore ... money talks louder than colour and height.

Free tattoo in the Land of the Dong 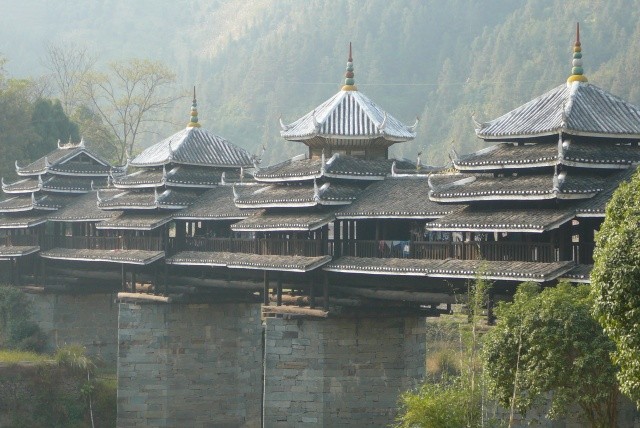 The Cheng Yang wind and rain bridge.
I walked down the hill and said goodbye to the rice terraces. Three bus rides later I was at the Cheng Yang Wind and Rain Bridge, outside the town of Sanjiang [Sanjiang-travel-guide-239203]. This is pretty rural ... the buses are smoking and they go through pretty rough areas where the roads are completely unsealed ... the bus was white after the journey from the dust (being the dry season).

I got a room in a hostel by the river quite close to the Bridge. I'm here to experience life in a Dong (name of a minority tribe) village. On the surface, the Dong seem quite similar to the Dayaks and Kadazan-Dusun of Borneo ... giving credence that the Malayo-Polynesian people are from South-West China. Their dance, musical instruments and dress are related.

Over dinner I met a Swedish guy ... we were comparing our luggage and packing ... I was quite proud of my 9 kg. He had a bit more as he had bought a tattoing machine in Beijing [Beijing-travel-guide-208144]. He offered me a free session as he needed some practice (... an infection waiting to happen). He then showed me his DIY pattern on his leg ... imagine tattooing yourself!!! He's going to meet up with his girlfriend in Phuket ... I think she's going to leave Thailand a completely different person (appearance-wise)! 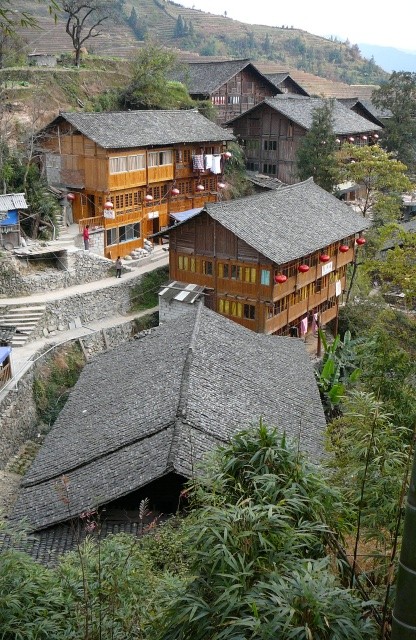 Little hillside village of Ping An is dominated by the Zhuang minority.
This morning I woke to the sound of dripping on my backpack ... then it became a torrent ... I think the family owning the hotel sleep in the loft and baby did a wee wee ... or hopefully a glass of water fell over. Fortunately I managed to leap out of bed to move my pack before it became a torrent.

I had breakfast overlooking the roofs of the other houses, the hills and the terraces. Nice. A hunched old lady had two buckets, one at each end of a long pole carried over her shoulders. She skillfully scooped the manure over her tiny vege patch on the side of hillside path ... all without putting down the buckets or spilling it. Like I said it was a pretty rural scene but I'll cross salads off the menu for today.

I went for a couple of walks today . 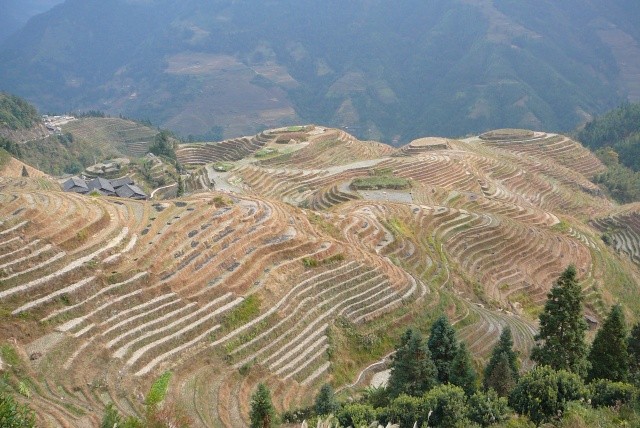 Rice terraces looking a bit dry... this morning I walked to the neighbouring village and back, a journey of three hours. Then in the afternoon I took a shorter walk to a lookout point ... more views of the rice terraces and village.

Over dinner I got talking with a couple from Europe ... he works for a major airline specialising in flight simulations. I thought ... what do you have to do with flight simulations ... you just buy the simulator, right? Well apparently not ...

When you buy a flight simulator for a few hundred million bucks, they don't always display the characteristics of the aircraft it is meant to simulate (damn it!)... it may not produce the right shudders or noises. Eg. a lopsided landing may only have two thuds when it should have three.

Besides that, he also has to load and maintain terrain information especially for new airports as the simulators are only preloaded with basics like long-lat, runway length etc. 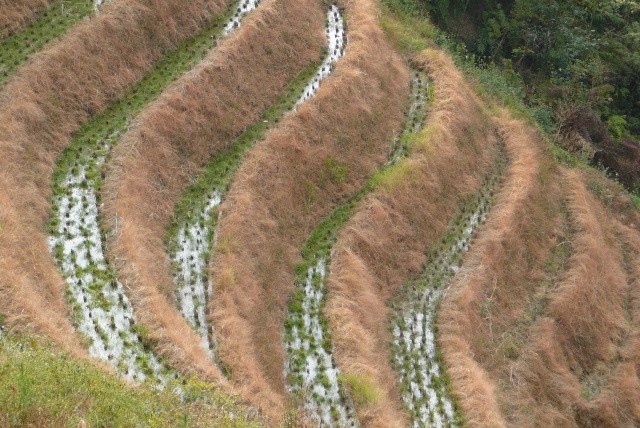 Rice terraces ... as wet as it gets in November.

Somehow my new friend thinks I should get into this simulator programming career ... I need to learn C++ first (well, after I find out what it is). Here's a few snippets from the conversation for the pilots amongst you (yawn for the rest of you):

1. He's very pro-Airbus as he thinks their logic is very consistent with a good workflow and ergonomics for the pilots. He said on some Boeing aircraft the trim alarm sounds the same as failed pressurisation alarm ... causing a very bad accident with loss of life.

2. He's also very proud of his airline ... they don't employ any ex-Airforce pilots (presumed to be too reckless) ... and unlike some airlines, Airbus and Boeing pilots are quite strictly segregated due to their differing philosophies. He couldn't believe when I told him one budget Asian airline allows dual rating of A320 and B737 pilots as long as they don't fly the other aircraft on the same day.

3. He also has access to the flight simulator training results ... there's a captain of XYZ airline who loses orientation completely in the dark.

Dutch Season in the Land of the Zhuang 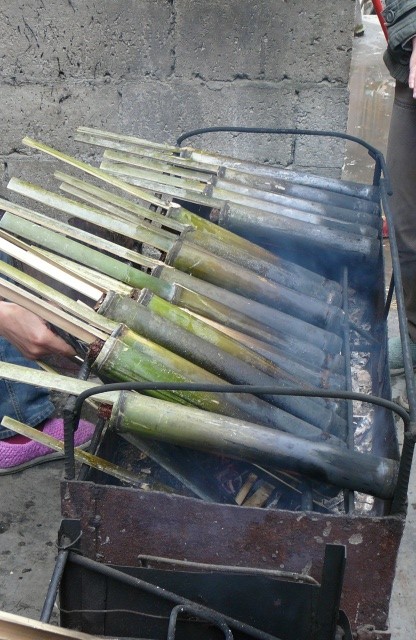 "Lemang" meets "Lo mai kai" on the grill.
I woke early and left Guilin [Guilin-travel-guide-219518] for Longsheng by bus then transferring to another to the Ping An rice terraces. I've got a room in the 600 year old village ... mostly wooden houses with some concrete structures coming up ... come here before they tile it over as they do in most of China.

Residents in the village are of the Zhuang minority tribe. Minority tribes are not considered ethnic (Han) Chinese and have special privileges (like the Tibetans and Uighur Muslims?) ... eg. exempt from "One Child" policy? The women keep their hair to ankle length and will reveal them for foreigners for a fee (isn't that a form of stripping?).

It is still warm in the sun and right now (evening) it is frigid. 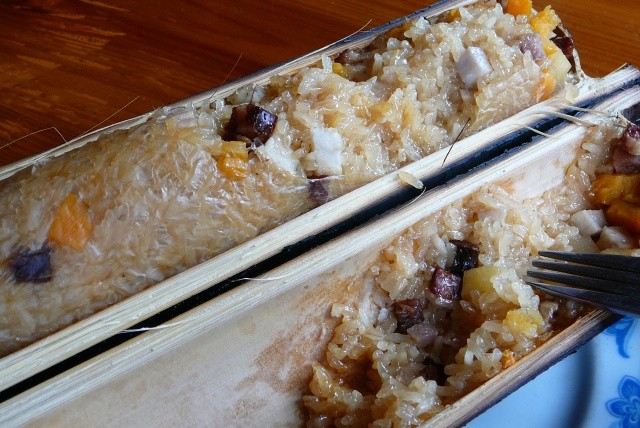 "Lemang" meets "Lo mai kai" on the plate.I'm at about 900m above sea level ... a bit higher than in Guilin itself. The rice terraces are now brown and barren ... due the dry autumn and post-harvest. The trees are showing a hint of the autumn gold.

I went for an hour-plus walk amongs the rice terraces this afternoon after arrival ... I hope to do a longer walk to the old villages of various minority tribes tomorrow.

I missed out on a local delicacy during lunch today. I've forgotten the name but it is glutinous rice with corn and bacon fired in bamboo shell ... it is the Malaysian lemang meets the Hong Kong yum char lo mai kai.

My little family-run hotel offers free internet to its customers :-) So here I am updating this blog because it is cold and there's nothing else to do in the little village. It is rather dark and I don't want to go out instead I step into a hole or on some cow patty.

The Dutch couple I chatted to over dinner had to turn back because they couldn't find their way back to their own hotel. But they also couldn't find the way to the next village which was clearly signposted. I wonder how the Dutch found Indonesia.

Anyway, nearly anyone who is white that I've met today is Dutch. I wonder why? Maybe they're escaping their winter. 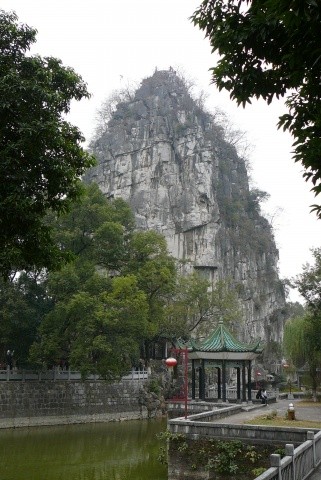 Solitary Beauty Peak.
Woke to a cool grey day ... or maybe brown ... very often the sky in China is brown due to pollution, desert dust or whatever other reason.

Climbed up to Solitary Beauty Peak then visited the Seven Star Park. The Peak is one of the several outcrops in town ... it provided a good outlook of the area.

Seven Star Park is a weird combination of a public park, amusement park, zoo, temple etc that also incoporates a large winding cave. The cave was probably the highlight with many stalactites and stalagmites ... being China the cave floor had been paved over and there was full GSM coverage in there for your phone!

Unfortunately the beauty of the park was spoilt by numerous cartoon characters everywhere. Disney would have a field day counting the number of copyright infringements.

I head to the countryside tomorrow ... that should suit me better.